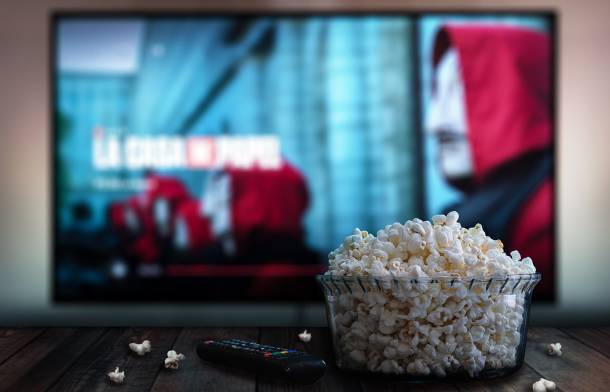 September was a massive month for new movies on Netflix, both when it comes to Netflix’s original films as well as popular movies that Netflix has licensed from other studios. Highlights from among the content Netflix licensed starting in September include Pineapple Express, Red Dragon, Glory, and all three installments of Back to the Future, and that’s just the tip of the iceberg. Then, when it comes to Netflix’s new original films, there were three in particular that Netflix subscribers seemed to love the most: The new Charlie Kaufmann movie I’m Thinking of Ending Things starring Jesse Plemons, The Devil All The Time starring Tom Holland and Robert Pattinson, and Enola Holmes starring Millie Bobby Brown and Henry Cavill. 57 new movies in total were added to Netflix in September, and you can check them all out in our earlier coverage so you can be sure you caught all of the biggest new releases.

September is now behind us and October has arrived, so it’s time we turn our attention to Netlfix’s October 2020 movies list.

DON'T MISS THESE DEALS: Amazon just launched an early holiday sale like nothing we’ve seen before – here’s what you need to know

Believe it or not, a whopping 44 new movies were already added to Netflix’s catalog just during the first week of October. Highlights include Ace Ventura: When Nature Calls, Basic Instinct, Cape Fear, Fargo, Gran Torino, Her, House of 1,000 Corpses, The Outpost, and a criminally underrated dramedy called Stranger Than Fiction that stars Will Ferrell, Emma Thompson, Dustin Hoffman, and Maggie Gyllenhaal. We were so happy to see it slide up the charts this past weekend — definitely check it out if you haven’t seen it already, or give it a second viewing if you have already seen it. Another big release that’s already out in October is called Vampires vs. the Bronx, a new original Netflix film that tons of people are talking about right now on social media.

Moving forward, there are plenty of additional releases slated to take place this month that you should definitely look forward to. A new Adam Sandler movie called Hubie Halloween has been burning up Netflix’s charts — if you’re into Adam Sandler movies — and other big additions to Netflix include Moneyball, Batman: The Killing Joke, a talked-about Netflix original called The Forty-Year-Old Version, and ParaNorman. There’s also a new Aaron Sorkin movie out today called The Trial of the Chicago 7, which stars Sacha Baron Cohen in his second dramatic role. Finally, David Fincher’s new flick Mank was supposed to be released at some point in October, but Netflix didn’t include it on its official October 2020 releases list. We’ll have to wait and see if there’s a surprise in store.

The full schedule of Netflix movie releases in October 2020 can be seen below, and you can check out our earlier coverage to see all the new shows headed to Netflix this month.

‘Deadpool 2’ producers fined over $200,000 for accident on set that killed stuntwoman