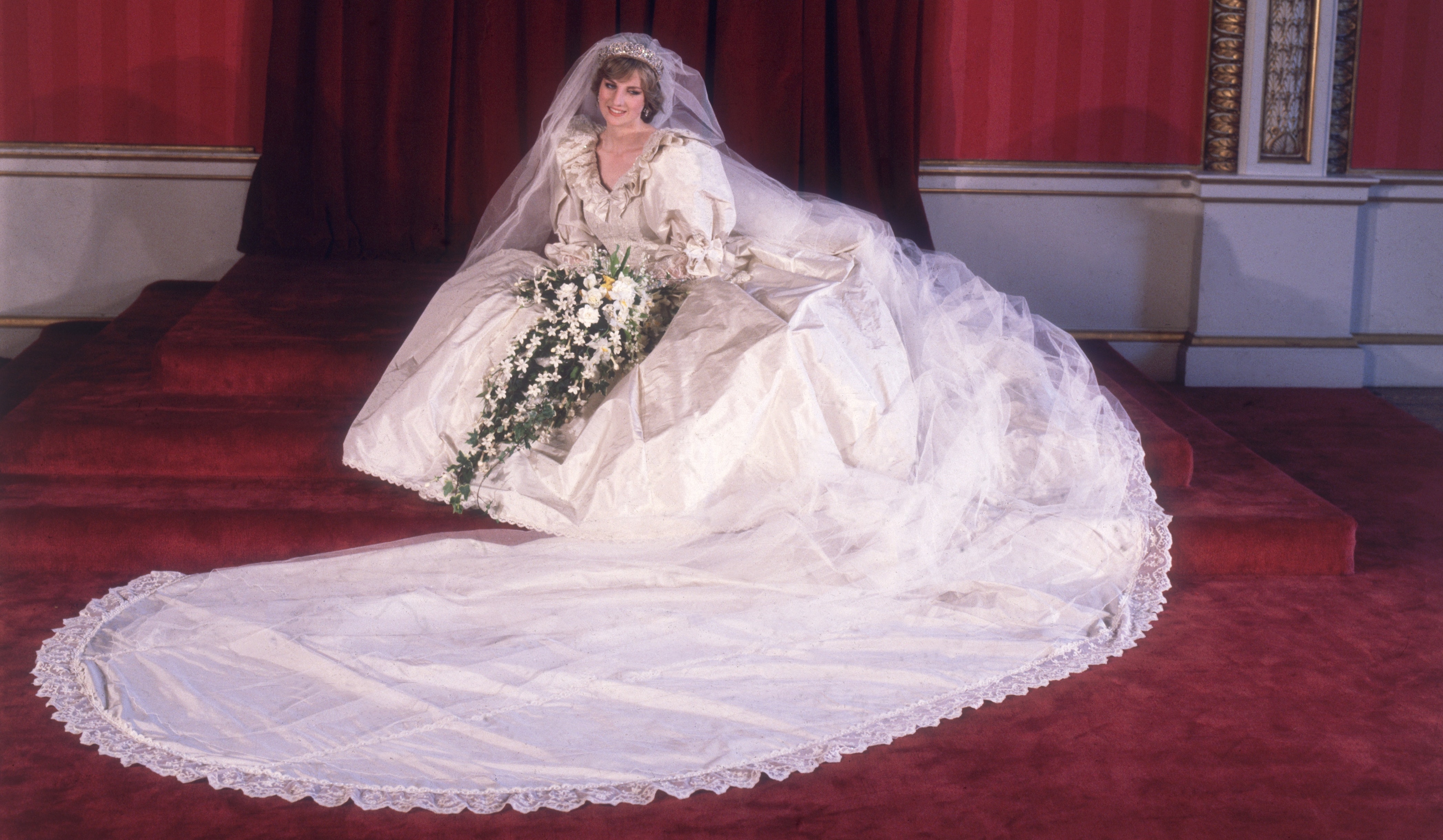 Princess Diana was one of the most memorable style icons of her
time. And though the list of timeless Princess Diana looks is long,
there’s one statement-making gown that takes the crown: the
wedding dress worn by 20-year-old Diana Spencer when she officially
became royalty. But many still don’t know the real story behind

Worn on July 29, 1981, Princess Diana’s wedding gown was
designed by David and Elizabeth Emanuel. The dress was an ‘80s
dream, with a ruffle neckline, full skirt, and puffed sleeves, made
of silk taffeta with lace trim and embellished with pearls.

It featured a train that measured 25 feel in length and the veil
cascaded even further behind that, trailing a dramatic 153 yards of
tulle in her wake. Rumor has it that Diana even had a second
back-up wedding gown waiting in the wings if the first was leaked
to the press before her big day. Luckily, though, it didn’t have
to come to that.

One of the most recognizable bridal gowns in history, Princess
Diana’s wedding dress is still referenced today, in museums,
movies, and of course, series like Netflix’s The Crown. And thought
it’s been almost 40 years since her wedding, fans are still
inquiring about such specific details as the wedding dress
designer, weight, cost, and train length — and of course, where
the dress is today. Scroll down for more details about Princess
Diana’s wedding dress and info on how they recreated it for Season
4 of The Crown.

Princess Diana’s will stated that her iconic wedding dress would
be gifted to her children, Princes William and Harry, upon her
death. Its exact whereabouts are unknown, but there is no reason to
believe that it isn’t living comfortably among many of Diana’s
other clothing and jewels that were passed to her children in
August 1997.

Who made Princess Diana’s wedding dress?

Princess Diana’s wedding gown was made by husband and wife team
David and Elizabeth Emanuel. It was crafted of taffeta, tulle,
lace, and a whopping 10,000 pearls. A second dress was designed
just in case the initial one leaked to the press, but it has since
mysteriously disappeared from the studio.

How much did Princess Diana’s wedding dress weigh?

While the dress’ weight specifically is unknown, it can be
extrapolated that it was quite hefty. Made of taffeta that amassed
a 25-foot train, 153 yards of tulle, lace, and pearls, the volume
of the entire look was nearly too large to fit in Diana’s arrival
carriage. In fact, the Princess was so stuffed into her vehicle to
her own wedding ceremony that the dress famously arrived
wrinkled.

How much did Princess Diana’s wedding dress cost?

How did ‘The Crown’ recreate Princess Diana’s wedding dress?

As the gown is so iconic in the real world, The Crown
costume designer, Amy Roberts, found the task to re-create it a bit
daunting. “The challenge for me was not to be frightened of it
because it seems to me that is the dress that everybody knows,
don’t they?” Roberts told Bustle.

To learn more about the original garment, Roberts met with one
of the gown’s designers, David Emanuel, who shared copies of the
inaugural design.

Emanuel made sure The Crown costume team didn’t feel pressure
to replicate exactly what he had done nearly forty years ago. “He
was very light about the whole thing,” shared Roberts, “and he
said, ‘Just do it. Just do it and enjoy it.’ So that kind of
released us from the fear.”

To that end, Roberts took certain liberties when recreating
Princess Diana’s iconic wedding gown. “I’m always saying if
there were 2,022 pearls on that dress, I just needed to see some
pearls on there. It didn’t need to be that exact amount. It could
be 20,” she said, nothing that the original actually featured
10,000.

Some details were copied exactly. “We did replicate the lace,”
Roberts revealed. “And the son of the man who made the original
lace in Nottingham, which is our big lace center in the UK, he
recreated the lace for us.”

The replication of the dress itself took three people four weeks
and 600 hours to create. Even the costume boasts a whopping 95
meters of fabric and 100 meters of lace, with a train that measures
30 meters on its own.

And, daunting or not, Roberts and her team executed the gown
with such strict mastery that the similarities between the dress on
The Crown and the original were uncanny. “You know that magical,
almost Walt Disney fairytale princess,” Roberts shared. “It’s
every little girl’s fantasy of what a princess should look like.
That was the big thing for us. And the 25-foot train. And that’s
what we did.”

Source: FS – All – Entertainment – News 2
How Princess Diana's Wedding Dress Was Recreated On 'The
Crown' Season 4

A Sore Throat From COVID-19 Feels The Same As The Flu Or A Cold, Doctors Say